There’s yet another Gone With the Wind-related story in the news this week and it involves the house that inspired Gone With the Wind‘s creation somehow. Oh–you didn’t know that a HOUSE inspired Margaret Mitchell? That, apparently, she had no ideas at all but saw a house and then dreamt up a thousand page book?

That would be because the house has nothing to do with the creation of the book or the “inspiration” behind it OR the movie. Here are the facts:

The house being sold (once known as Harris Plantation and then Whitehall and located in Covington, Georgia) did not inspire GWTW. For a decade or so, the house has been lovingly operated as the Twelve Oaks Inn Bed & Breakfast, by a couple who admirably rescued the aging house in 2011. This name is not a clue as to an involvement with GWTW; it is instead a way to capitalize off an imagined, romanticized connection: GWTW has a few antebellum mansions. . .and this place looks like an old antebellum mansion.

I say, “looks like” because what you see today is not what was, in fact, in place prior to the Civil War, which would classify it as “antebellum”. The Greek Revival beauty is “antebellum-adjacent”, say, or “antebellum-style”. But the house’s original configuration was one-storey. The columns and upper stories were added in the 1900’s, well after the Civil War. It’s antebellum on the first floor, maybe. . .but the house looked very different before the war. 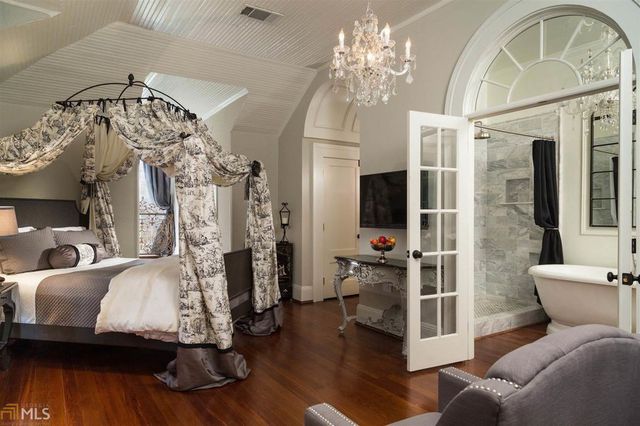 As for its role in inspiring GWTW, again. . .no. “But the Realtor claims it did!”

Honey, Realtors walk you into a room with a refrigerator and oven and inform you, “. . .And this is the kitchen.”

Not always the brightest bulbs on the marquee.

(Note: Not all Realtors are idiots. I know a few who understand that most people don’t need a porch identified as such.)

Margaret Mitchell began writing GWTW out of frustration. She had researched the Civil War for several articles she wrote as part of her duties at the Atlanta Journal, where she worked as a writer. In her research, she accumulated a great deal of information that did not fit in with her stories, but which she held onto. An accident left her at home and reading books about the Civil War. During this time, she grew increasingly frustrated; she was a creative spirit without an outlet. While her articles for the paper had given her a writing outlet, they had not provided her an outlet for her creativity and now, trapped at home with a bad ankle needing recovery, reading books by other writers about the Civil War, and a possessing wealth of information and history about Atlanta and the Civil War (and, it must be added, a biased recounting of said history from the world of her upbringing) she needed an outlet. And her husband, sensing this, bought her a typewriter, told her to write, and the eventual output was the mammoth manuscript which became Gone With the Wind. It was not her first attempt at writing (another myth we’ll talk about later); she had written fiction all her life and that practice prepared her in her quest to turn a story she had been playing around with in her head into a novel on printed pages. But a house in Covington–35 miles east of Atlanta–did not provide the inspiration for or impetus behind her work. 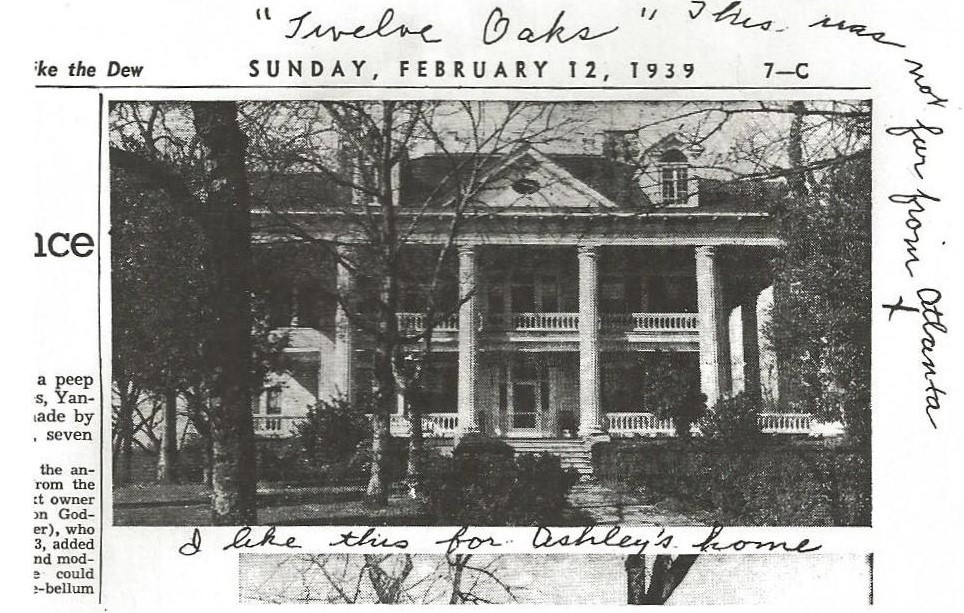 A piece of “proof” the sellers are using is a clipping from a newspaper that shows the house and Mitchell’s scrawl over it, reading, “I like this for Ashley’s home” and “This was not far from Atlanta”. This was provided to her acquaintance, Wilbur Kurtz, a local historian (and co-founder of the Atlanta Historical Society, now the Atlanta History Center) who she had hired by Selznick’s team when Selznick’s company began pre-production on the film adaptation of her book. Despite the overarching theme that she wanted nothing to do with the film, Mitchell actually did a few things to help, from touring Clayton County and Atlanta with a small group (Kurtz, original director George Cukor, and an assistant) to sending in occasional pieces she came across in newspapers and magazines or anecdotes she read. But this clipping did not inspire the story; it came well after the story was a Pulitzer winner and an astonishingly successful best-seller. Nor did it even inspire the Twelve Oaks in the film; that house is a merger of antebellum architectural tropes, and as no real-world counterpart. Printed in February, 1939, this newspaper clipping was sent when the film adaptation of Gone With the Wind was already two months into production

Realtors also mispronounce their job title as “Real-a-Tors.” Listen–there ain’t no connection, other than that people are making a claim and just saying something doesn’t make it true.

Calling a house “Twelve Oaks Inn” does not mean it passed any test of authenticity. Its owners, John and Nicole Munn, did a splendid job refurbishing the home and filling it with some gorgeous pieces. But if I name my house “The Death Star:, it doesn’t mean Darth Vader’s walking around inside. It just means I named it after the intelligence of readers ready to believe anything they read on the internet. Look. . .you have the full knowledge of the ENTIRE WORLD at a simple “www” address. Use it. But don’t repeat the claims–irresponsibly furthered by alleged journalists who have also bought into the hype–that this house somehow inspired GWTW. Mitchell’s book, Selznick’s film? Neither find their roots in this house. As charming as it is, and as envious as many of must might be of its eventual owner, it played no discernible part in the creation of either book or film. It merely capitalized off the enduring appeal of both.